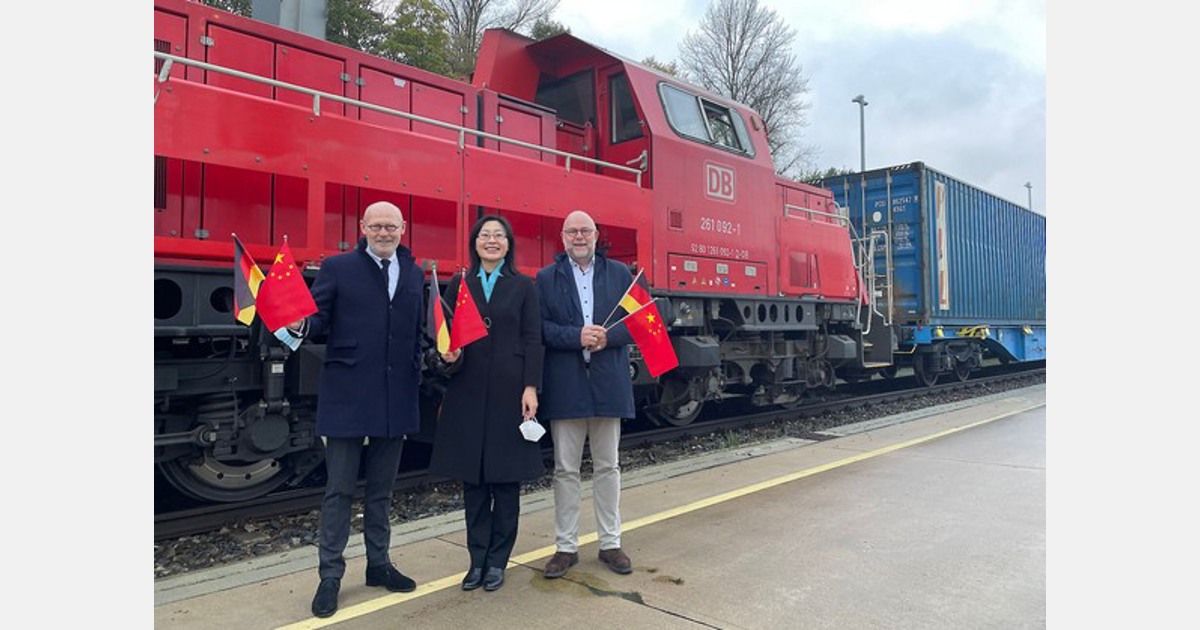 The “Shanghai-Express” reaches the port of Hamburg

Fully loaded, the first container block train of the new service reached the DUSS terminal in Hamburg on 25 October. The new service improves the already well-supplied rail offer between Hamburg and China.

Starting in Shanghai, the partner city of Hamburg, the new service took the train via Alashankou in Kazakhstan, Belarus, Małaszewicze in Poland and finally Hamburg. The launch ceremony took place in the presence of two deputies to the mayor of Shanghai, ZHANG Wei and ZONG Ming. The “Shanghai Express” is operated by Shanghai Orient Silkroad Intermodal Co. Ltd.

The “Shanghai-Express” set off on its first run with fifty 40-foot containers loaded with clothing, shoes, glassware, auto parts, photovoltaic equipment, kitchen utensils, furniture, lamps and other consumer goods. TONG Jisheng, president of the operator, plans to offer the first round trip of the train from Hamburg to Shanghai in about a month.

In normal operation, initially one train per week will leave for Hamburg, but in the long term, the frequency will be increased to between two and three trips per week. According to the operator, departures until the end of this year are already full.

About 2.4 million standard containers, or TEUs, are handled annually in Chinese trade in the Port of Hamburg. Almost one in three containers passing through its quay walls is bound for or originated in China.

Rail offers an alternative to sea and air transport. Last year, more than 230 weekly connections were marketed between Hamburg and 20 destinations in the People’s Republic. Other connections from Shijiazhuang in Hebei Province and Wuhei in Gansu were added this year. In 2020, around 107,000 TEUs were transported between China and Hamburg by rail.

The ports of the cities of Hamburg and Shanghai have been partners since 2004. Thanks to the Hamburg representative office on site, the good relations between the actors of maritime transport have been extended to those involved in trans-Eurasian rail services.

This is the hottest villa in St John, USVI Caribbean Journal