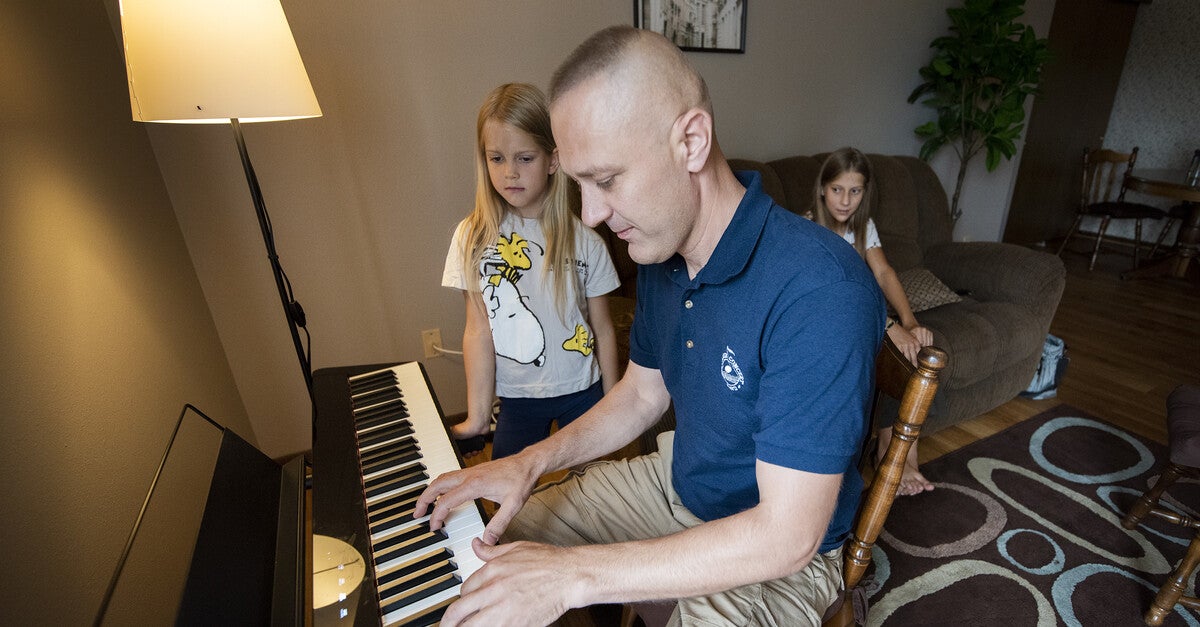 Peter Sokor has played the piano since he was a child, and back home in Ukraine, he made his living teaching adults and children. He enjoyed teaching people and planning big concerts where students invited their families, friends and colleagues to see them perform.

When Russia began invading Ukraine in February, Peter, his wife, Kseniia, and their three daughters, Sara, Yeva and Maria, fled their home near Kyiv, the country’s capital. At first Peter tried to bring his keyboard as they escaped. But as their journey continued, he had to leave it behind.

“I need to play,” he said, describing the piano as a way to express himself.

One of the first things Peter acquired shortly after arriving in Wisconsin in April was a new keyboard. Two months later, with the help of a Stoughton-based aid organisation, the family found a new home. Now the instrument is on display in the Sokors’ Stoughton flat – a place where Stoughton Resettlement Assistance Program (SRAP) helped them get. And again, Peter is able to offer lessons for locals interested in learning to play – although for now, on a donation-only basis.

From August 1, the Sokors will be one of four Ukrainian families that SRAP has helped to house in a fully furnished apartment or house. The program will cover the families’ rent, utilities, and anything else they need to adjust to life in the United States.

Kay Weeden, co-coordinator of the program, said when SRAP began organizing in late 2021, members originally planned to help resettle Afghan families seeking refuge at Fort McCoy. But in mid-February, Weeden said the Afghan refugees had all been relocated to other communities in the United States. Soon after, the war between Russia and Ukraine began and SPOR volunteers redirected their efforts to resettling Ukrainian refugees in Stoughton.

“When we started, we were just going to try to help out one or two people,” Weeden said. “Since then, we’ve decided it works and we’ve formed a 501(c)(3) and applied for funding wherever we can get it.”

SRAP members worked closely with residents and local organizations to raise funds and items for Ukrainians, including furniture, household items and toiletries. Community donations have taken various other forms, such as paying Sara, Yeva and Maria to take tumbling lessons and providing families with new bikes and helmets.

“Sometimes we’re so surprised that we don’t know people, and they’re so nice,” Peter said.

Sara, Yeva and Maria were also enrolled in Charis Classical Academy when they arrived in Wisconsin in April. Maria said that all her classmates were nice and became her friends on the first day.

Before the Sokor family was linked to SRAP, a couple from Oregon, Wisconsin named Maria and Ben Llewellyn served as sponsors for the Sokors, allowing them to travel to the United States.

Maria Llewellyn spent part of her childhood and youth in Ukraine. When the shelling started in February, she contacted her best friend and invited her to come and live with her family. Her best friend’s family left Ukraine with the Sokors because they knew each other and had gone to church together. Maria said it was safer for several families to flee at the same time, as they were crossing dangerous terrain.

The families traveled to a refugee camp in Poland and then to the Czech Republic. Back in the United States, the Llewellyns and their church raised money for the two families and sent them monthly assistance for food, airfare and other living expenses. Through their continued connection with the Sokors, the Llewellyns also invited them to stay at their home.

Maria’s friend and her family have decided to stay in the Czech Republic for the time being. But the Sokors accepted the Llewellyns’ offer, flying first to Mexico, then to San Diego where they met Ben Llewellyn, and finally to Madison.

Since relocating to the United States, Peter and Kseniia Sokor, along with other Ukrainian families, have waited months to get their work permits, Maria said, without the government saying when their applications will be approved.

Maria said she regularly contacts representatives to try to speed up the process, and in the meantime her family has also sponsored more Ukrainian families, helping them “give them a chance at a better life”.

As more refugees continue to seek safety in the United States, Weeden said SPOR plans to expand and work with other populations in the future who are fleeing persecution or war.

“We would like to be that organization and start building Stoughton on the reputation of being the friendly town that it is,” Weeden said, “welcoming newcomers with dignity and respect for their culture and with enthusiasm.”

SPOR accepts donations of household items on SignUpGenius and use GoFundMe for fundraising efforts.

Letter: Saddened to learn of the closure of ReStore | Opinion