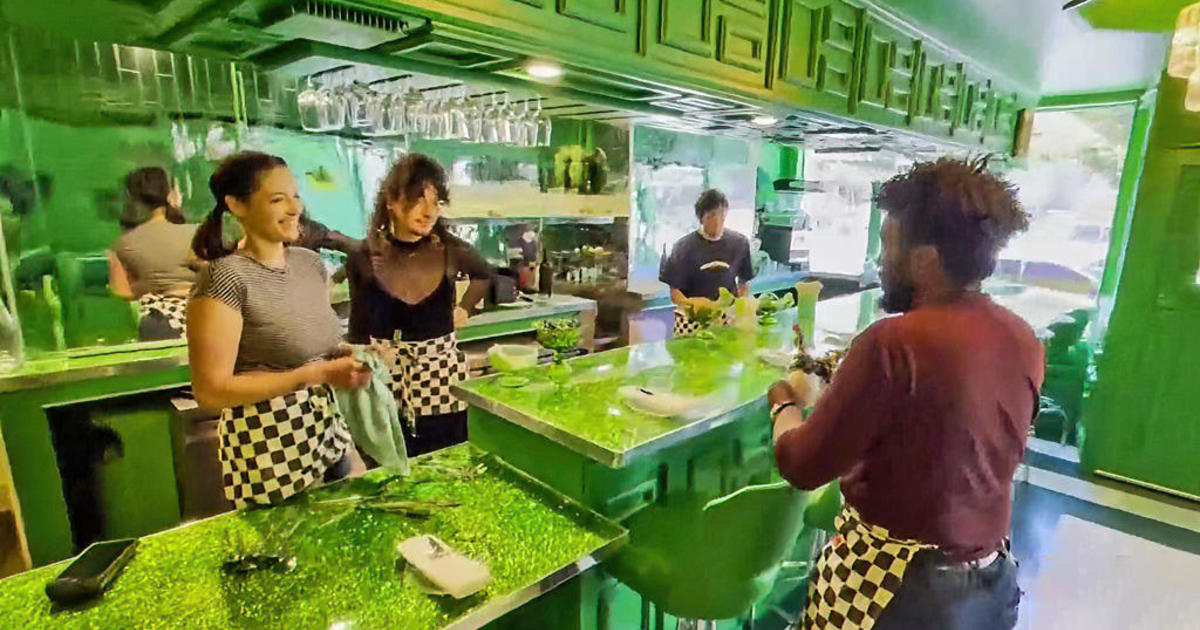 SAN FRANCISCO (CBS SF) — You may have used recycled clothing or furniture, but would you try recycled food?

People line up outside Shuggie’s Trash Pie every day for a one-of-a-kind feast at the city’s first restaurant dedicated to eliminating food waste and fighting climate change. Diners waited up to two hours outside for a table, according to the owners.

The space is eye-popping, funky and monochromatic. The Mission District restaurant on 23rd Street turns heads and draws attention to a serious mission – to save our planet.

Co-owners David Murphy and Kayla Abe take ugly or spoiled produce, farm surplus and leftover meat and fish and make them the stars of their menu. These are the things that would normally be thrown away.

“No, we’re not dumpster diving, it’s all really, really beautiful, like wilted greens lying around all day at the farmers market,” Murphy said. “What happens to these? People always go for the nice crispy things like the things that look the best, but often the stained or wilted greens, or the stained tomatoes or a radish that has two little paws, these things are neglected.”

For example, pizza dough contains whey, a byproduct of their cheese-making process, and oatmeal, which is leftover from the oat milk-making process.

“In America, we waste up to 40% of our entire food supply, so whether it’s at the farm level, things that are looked at because of cosmetic irregularity, they don’t have outlets. for them, or down to the consumer level, where we take too much of a portion off our plate and throw it away,” Abe said.

Abe and Murphy are also the founders of Ugly Pickle Company. To date, they say they have saved over 40,000 pounds of product through various projects.

They want customers to eat their way to a sustainable future.

And maybe even try something new.

Shuggie’s wines are also made without additives from small producers.

Betty Yu joined KPIX 5 in November 2013 as a generalist journalist. She spent two years at WTVJ, the NBC-owned station in Miami, as a reporter before moving to San Francisco.