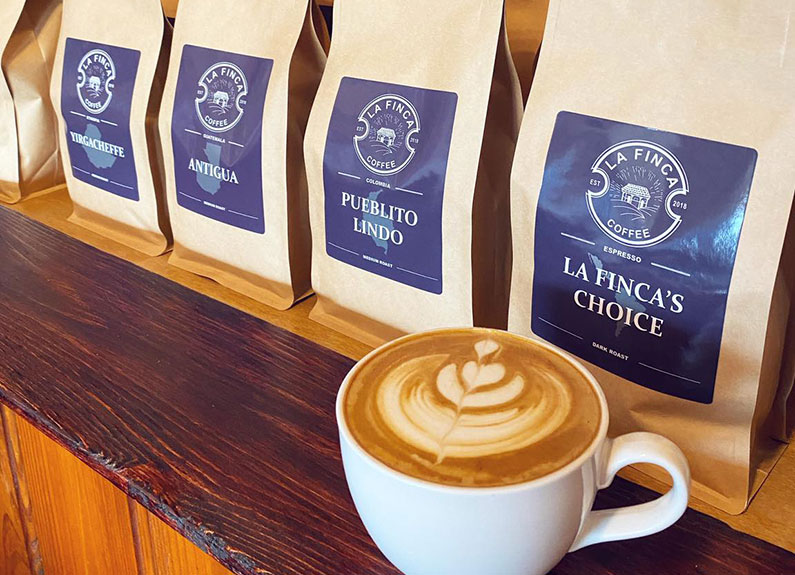 La Finca Coffee will open a second location at 4440 Manchester Road in The Grove this fall. The new store will be the coffee shop and roaster’s first location in the city of St. Louis after nearly four years of establishing its reputation in Eureka.

Co-owners John and Alejandra Hagedorn opened La Finca’s original location in October 2018, inspired by a cafe they visited while visiting Alejandra’s home in Colombia. “There was a lot of stonework and rustic furniture, and then the artwork was just floor to ceiling, all over the walls,” John said. Alejandra had spoken fondly of the aesthetics and style of café culture in her home country, but it initially went over her head. “I had no reference point,” he said. “When we went there, and I experienced it first hand, I said, ‘Yeah, there’s nothing like that back home. “”

La Finca’s original location was built in the image of the cafe the Hagedorns had encountered in Colombia, and the new location will have echoes of that design. However, John Hagedorn said it would also be a brighter space. “Light colors, more of a tropical feel,” he said. The approximately 1,300 square foot space, part of a new apartment building directly across from Urban Chestnut Brewing Co., will house approximately 30 patrons inside. Hagedorn also plans to add some street side tables. The larger location provides more space for La Finca’s roasting operation, providing a platform to grow the wholesale arm of the business.

Unlike the original location, where dining options are limited to a selection of pastries, The Grove Cafe will have its own kitchen. The menu will basically fall into two categories: Mexican tortas and corn-based Colombian arepas. Tortas are what John brings to the table, thanks to recipes passed down from his Mexican mother and grandmother. Her mother owned El Burrito Loco in South City in the early 2000s, while her grandmother was known in her hometown in Mexico for her torta shop.

Hagedorn said the torta selection will be inspired by traditional combinations of flavors and ingredients, with family recipes as the source for many preparations. An example of this will be his grandmother’s “Doña Maria” torta. “It was melted cheese, ham and lettuce, and this salsa that was passed down from generation to generation,” Hagedorn said. “I can’t wait because people are going to love the taste of this sandwich.” Other tortas he’s considering for the menu include the torta cubana (not to be confused with a Cuban sandwich) and the torta ahogada (which translates to “drowned sandwich”), a pork sandwich served on crispier bread. than usual, which is then sprinkled with a salsa.

Alejandra Hagedorn develops arepas from recipes her stepfather used in his restaurant in Colombia. “In Colombia they have arepas with everything,” John Hagedorn said. “Breakfast, lunch and dinner, there is an arepa.”

La Finca’s coffee selection includes iconic products like tinto – black coffee brewed with panela (an unrefined brown sugar widely used in Colombia) – which is a daily staple in Colombia. “It’s a bit more than just making black coffee and adding sugar to it,” he said. Another Hagedorn favorite is Café de Olla, a Mexican-inspired coffee made with cinnamon and sugar. These items complement a range of espresso drinks, in addition to smoothies, Frappes and a rotation of seasonal coffees.

A recent seasonal addition is the espresso tonic, which Hagedorn likes so much he said it will be offered permanently. “We’re always adding new things, new signature drinks, new things that I was interested in at the time,” Hagedorn said. “Right now I’m into mocktails and things like that. I love this blend of bitters and subtle flavors. Hagedorn said he draws inspiration from the latest trends and techniques on display at events such as the World Barista Championship.

Hagedorn said opening hours for the new cafe at La Finca will be similar to the Eureka site from 6 a.m. to 5:30 p.m. on weekdays. Construction is underway on the space, and Hagedorn is planning for a two-month build, though he was careful to acknowledge the possibility of delays.