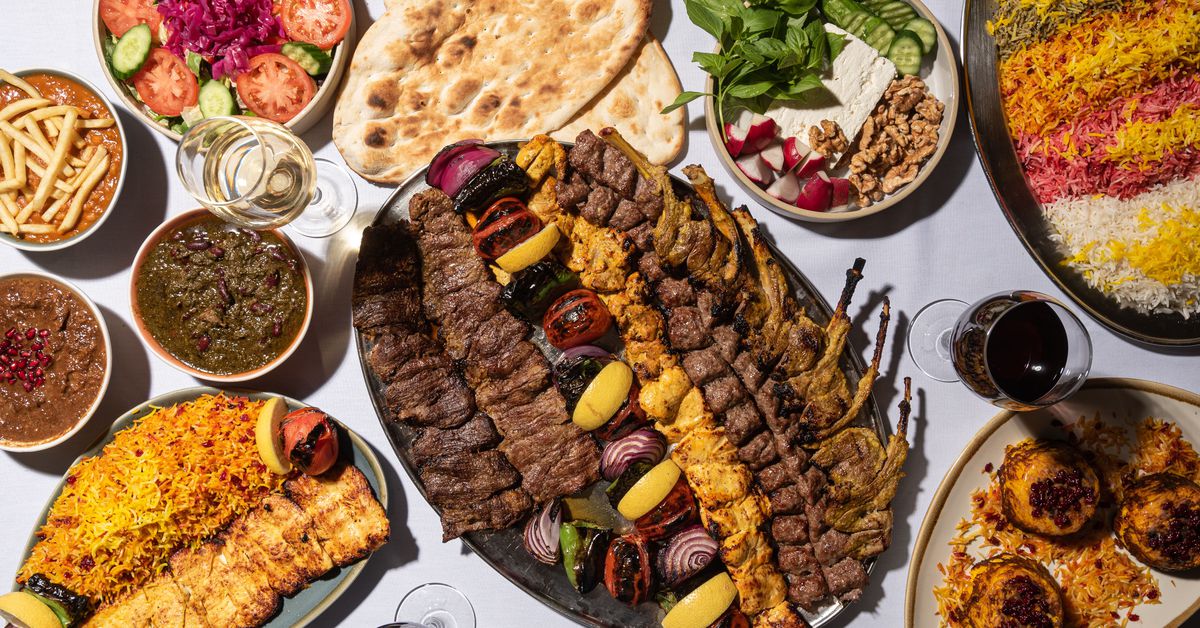 On a Saturday night in the Persian restaurant Pardis in Glendale, patrons gather behind the welcome stand placed between the glittering bar and a wall of glass filled with wine bottles. The host, most often General Manager Armi Tetoos, greets customers with a slight bow in a sign of respect. Gradually, the tables in the elegant dining room, reminiscent of a CB2 furniture store, fill with diners, many of whom will linger for hours, patiently picking up the last bites of barberry, ghormeh-tinged rice. dark green sabzi topped with cooked herbs, and generous platters of perfectly formed koobideh, before finishing their meals.

Ahead of the opening, Pardis boasted for more than 10 months of a sign in gold letters promising to replace longtime Persian restaurant on Glendale Avenue, Cafe Bahar. Pardis founder Henrik Nazarian, an Iranian-Armenian restaurateur and franchisee of more than 20 IHOP restaurants in Texas and Ohio, intended to start a new kind of Persian restaurant in Glendale, a city that is already home to a rich collection of institutions in the Middle East, each with its fiercely loyal clientele. While Nazarian’s other restaurants are classic American diners who emphasize consistency across breakfast and other everyday fare, he wanted Pardis to become a new dining destination.

With around 40 percent of Glendale’s population being of Armenian or Armenian-Iranian descent, demand is high for Persian food. After the Iranian revolution of 1979 and the fall of the Shah, many Iranians and Iranian-Armenians settled in Los Angeles and neighboring cities such as Glendale, creating their own communities and making food one of the most popular ways. important to preserve their cultural identity. Over time, restaurants like Raffi’s Place, Shamshiri, and Shiraz have made Glendale one of the best places for Persian cuisine in Southern California, adding to the wealth of Lebanese, Greco-Armenian and Armenian restaurants serving cuisine. of the Middle East and the Mediterranean in the city.

Pardis opened in April 2021 and has already become the city’s busiest new Persian restaurant. A thrilling mix of Armenian dialects, Farsi, and English reverberate through the space as customers order from its expansive menu. Older guests nod their heads while the younger ones let their enthusiasm slip away as each plate arrives – proof that these dishes can satisfy all generations. “We chose Glendale because of the Armenian, Iranian-Armenian population. They really understand the culture and the food, ”says Miller. Still, there is a warm sense of hospitality, even for first-timers who may not be so familiar with Persian cuisine.

The combination of the dining room with glass doors, black tablecloths, black leather dining chairs, and paneled walls decorated with abstract paintings of Aram Sevoyan that Nazarian’s wife brought from Armenia creates an ambience Worthy of a modern LA restaurant. The decor contrasts sharply with the utilitarian and often traditional vibe, with cultural accents or white tablecloths, at other Persian restaurants in LA. Pardis’ back patio, which has tall holly and lush bougainvillea with a fireplace in the middle, can accommodate up to 100 diners. The patio helped keep the restaurant afloat when it could only accommodate outdoor seating.

Pardis Payam chef Yousefpour started his career opening restaurants in Iran, although he was eventually banned from working or hiring employees due to his religion. Yousefpour follows Baha’i beliefs, an unrecognized religious minority that is considered “unclean” by the theocratic Islamic Iranian government. The chef moved to Armenia 10 years ago, operating a Persian restaurant in Yerevan for a year before immigrating to the United States. For the past nine years, he has worked in LA restaurants, learning new techniques and learning how to tailor a menu for customers. tastes. But everything goes first through his family; they try dishes and agree before he adds anything to the menu.

As at other Persian restaurants, meals at Pardis begin with free flatbread, usually served with chunks of cold butter, raw onions, and basil. At Pardis, baker Gurdeep Singh makes taftan, a traditional Iranian and Pakistani bread that is light and crisp with charred wedges and baked in a clay tandoor oven. Singh uses a recipe he learned in the Punjab to produce over a thousand breads a day here. The best accompaniment to taftan is paneer sabzi, slices of feta cheese served with nuts and seasonal herbs, although during the warmer months the plate may contain colorful cucumbers, crunchy radishes and ripe tomatoes. .

“There is a saying in Farsi: when you go to a Persian restaurant and want to know how good it is, you have to try their koobideh.”

Koobideh, beef barg, and soltani are Pardis’ most popular dishes. “There is a saying in Farsi: ‘When you go to a Persian restaurant and want to know how good it is, you have to try their koobideh,’ says Mehrdad Siahcheshman, the majestic manager of Pardis. The beef and chicken are softened in a marinade with earthy notes of fenugreek and light citrus that bring it to ideal tenderness. “It’s all in the right marinade,” says Yousefpour, who has developed all the recipes with memories of his mother’s cooking. But the menu goes way beyond kebabs. Chicken Fesenjoon, served with mashed nuts and pomegranate sauce, is stuffed with rich and aromatic saffron rice. Rice pilafs highlight barberry, saffron, cinnamon, and fresh herbs, while deeply flavored khoreshts (stews) add contrast to meats, breads and rice.

The restaurant offers a good selection of local and imported wines from Armenia in South Africa. Karas, Berdashen, Koor and Trinity are well known names representing Armenian wines. Made from native varieties such as areni and voskehat, they are grown in volcanic soil and made in ancient containers, highlighting 6,000 years of Armenian wine-making traditions.

For dessert, try the bamieh, a fried puff pastry covered with rose water and served with tea poured into small cups. While the small tea portions are meant to limit the amount of liquid one drinks after a heavy meal, they also provide diners with an opportunity to enjoy the space after dinner, from the chatty crowds to the soundtrack. jazz.

Although Pardis has been established as one of Glendale’s best new Persian restaurants, Nazarian wants to push the limits of what it can be, with the team discussing a transformation of the back patio into a jazz lounge and cigars after 9pm – the kind of late night destination that this part of Glendale sorely lacks. For now, Pardis is content to serve kebabs, stews, pilafs and stellar bread while still maintaining one of the city’s most elegant dining rooms and patios, a winning recipe that Glendalians have embraced. with pleasure.


Register to receive the newsletter

24 of the best-selling furniture to buy this week

How Chile’s same-sex marriage law could boost the economy