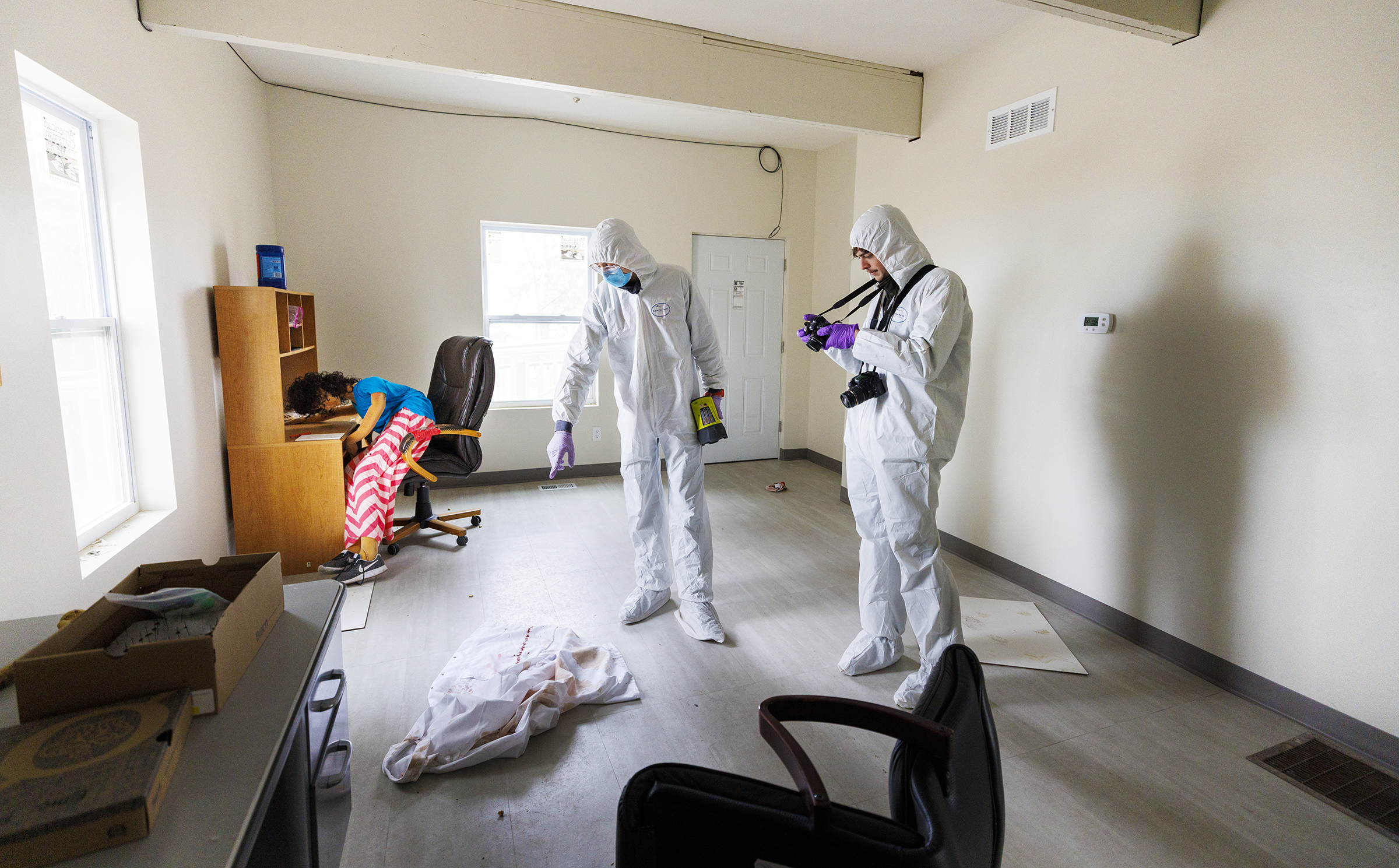 After spending years dealing with mock murders in the cramped confines of a small storage room inside Filley Hall, forensic science students at the University of Nebraska-Lincoln can now stretch their skills in Crime Scene Investigation at the Crime Scene House on East Campus.

It’s a game-changer for students, said Michael Adamowicz, director of the forensic science program, and Larry Barksdale, assistant professor of practice for the program. Previously, students had to work in teams of two in the small fictional crime scene processing room for the forensic science capstone course held each spring. With the interior of a house now available, the whole crew can work together, creating an atmosphere much closer to real life.

“It’s an immersive experience and very similar to what they will do in the future,” Adamowicz said. “Students can all come in at the same time and work as a team. It makes everything more efficient and saves us time.

Barksdale said he was able to make the scene more complex with more space, pull in the entire property for processing, and make accommodations for Nebraska’s sometimes unpredictable weather.

“There are a lot more places to look,” said Barksdale, a retired Lincoln police detective. “We were able to include the car in the case. We put fingerprints on the windows outside to deal with them. They will perform a 3D scan of the whole house. Another advantage I think of the house is that we can now work with the weather. We can do outdoor techniques, come in and warm up, and go again.

“Also, it was not possible to put tire tracks or shoe prints in the snow and expect them not to be disturbed, and it was not cool to put prints fingerprints on the exterior windows of Filley Hall We can now do this with the Crime Scene House and students can learn how to search for evidence in the cold Doing things in the cold takes special skills and a strong mind but it’s a good experience to have for this kind of work.

Students on the crime scene investigation track in the forensic science program developed much of their skills in labs held outside the property, which includes an old car riddled with balls, varied tire treads for comparisons, shallow fake graves and more. But the interior of the house had so far been unusable. The house and surrounding property have undergone extensive renovations and cleaning. Weather, six-legged creatures and a hole in the roof had all caused significant damage to the house, which became part of the program in 2016.

“He was in a much worse condition than we initially thought. We had to strip it down to the studs and in some cases even replace the studs due to termite damage, but it was fine,” Adamowicz said. “We also had to add the ramp outside and a staircase to the upper level to make it compliant with all the laws.

“After so many delays, we are really happy that it is done. It was a long process, for various reasons, but we were very lucky that our administration got things done, especially Ron Yoder, who was a champion of the project.

Completion of the house has come just in time, as the number of crime scene investigation students taking the capstone course will nearly double next year. The forensic science program has experienced marked growth over the past four years.

“I really don’t know how we could have managed so many students processing a Filley Hall crime scene, only having two in a room at a time,” Adamowicz said.

Kara Peightal, a forensic science major from Omaha, said the house adds variety to what students have been able to do.

“Last year we were kind of stuck doing everything we were doing on the car, and it was kind of like dealing with the same scene every week,” Peightal said. “Now we can be inside and process a much bigger stage, and have space to do that.”

For the capstone course, Peightal chose to oversee the photography of the scene. Working indoors and outdoors, with different surfaces and evidence, building on the skills she had learned previously.

“I had to be aware of the different filters I would need, and we’ll also be doing 3D imaging and scanning the whole house,” she said. “It’s really great because we’re using a Faro scanner, which is very expensive equipment, and I’m learning how to use it. More ITUC programs don’t have stuff like that.

The house needs additional furniture, which will be acquired in the summer. In the fall, the house will be integrated into FOR 120: Introduction to Forensic Science and FOR 400: Crime scene investigation. Adamowicz and Barksdale said the house will provide more learning opportunities for students, and they are both excited to explore the possibilities.

“Any time an asset gives you more options for your students, that’s a good thing,” Adamowicz said. “Truly, our only limits are the limits of our imagination.”

The brand of the YDesign group, Lumens, is revealed