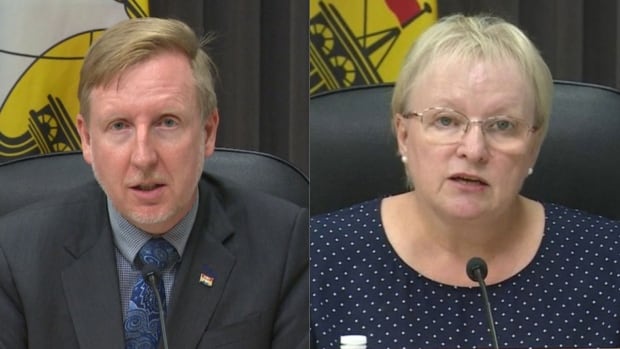 New Brunswick has 160 new cases of COVID-19, including 11 other cases of the Omicron variant, Health Minister Dorothy Shephard said on Wednesday.

“We know there will be a lot more,” Shephard said.

Omicron is at least 30% more transmissible than the delta variant, she said, and its doubling time is around every other day.

Shephard told reporters she couldn’t say where the new omicron cases were. “I don’t have the zones because we just got the confirmation at 1pm.”

She was also unable to provide details on the condition of those people, or the first three confirmed cases on Monday, or whether any of them are under 19. “We can try to follow up.”

Shephard said children and teens are now the largest group among new daily infections, and it has been difficult to slow the spread among them.

“But it is very important that the children are in school,” she said during a COVID briefing.

“We want to be sure that there is an appropriate plan in place that will keep our children safe and healthy as they learn.”

Education and Early Childhood Development Minister Dominic Cardy announced details during the briefing on the province’s plans for schools and daycares in the New Year.

New Brunswick will continue in-person learning at all levels of the COVID-19 winter plan, except level 3, where exceptions can be made, based on advice from public health, Cardy said.

“So if public health says we need to close a school, we will. But it’s a plan on how we keep schools open and safe,” he said, noting that it is. also applies to learning and childcare centers. .

The province is also expanding the rapid screening program for schools.

“Whenever a case is confirmed in a school, all students in a K-8 school, unvaccinated students in a high school, as well as all close contacts throughout the system will need to get a rapid test daily, regardless of their immunization status, ”says Cardy.

“Regular rapid testing may also be required in schools in communities with severe level 2 or 3 epidemics, even if a case has not been confirmed at that school. “

In addition, the province will be hosting a “vacation testing blitz” for all students, Shephard said. This will help identify new infections quickly and slow the spread, she said.

Students in Kindergarten to Grade 6 will each receive two rapid test kits during the holidays, while those in Grades 7 to 12 will each receive a kit as they will not be out of school for as long as the younger ones.

On Wednesday morning, Cardy told the legislature that the government could “move towards e-learning if necessary, despite all the drawbacks that this entails.”

“We’re looking at a situation here… that’s, in many ways, what we feared would happen to us in March 2020.”

New Brunswick on Monday announced its first three confirmed cases of Omicron – one in the Moncton area, Zone 1, and two in the Miramichi region, Zone 7.

“The preliminary information we are receiving on the Omicron variant is that it is significantly riskier for children compared to previous editions,” Cardy told the legislature.

We are in a time of making the worst choices, not the right choices.– Dominic Cardy, Minister of Education

“Omicron changes the water on the beans,” she said. “I don’t know how to express it more categorically than that.

“When the spread occurs in our younger population, and the spread is going to occur in our older population because of it, we need to take action to protect everyone.”

Michelle Conroy, People’s Alliance MP for Miramichi, challenged the government’s decision earlier this week to suspend all sports and activities organized for children under 12.

She stressed the importance of these extracurricular activities for the physical, mental and emotional health of young people and asked the Minister of Education if their cancellation would slow the spread of the virus more than using improved safety protocols.

Cardy said the province is spreading to schools despite security measures, and noted that other provinces, states and countries where Omicron has been confirmed have reached the point where schools that have no morning cases are closed at the end of the day.

“I don’t want to downplay for a moment… the negative impacts of this,” he said. “We are in a time of making the worst choices, not the right choices.”

A COVID-19 outbreak has been declared at the nephrology unit (4F) at the Dr-Georges-L.-Dumont University Hospital Center (CHU) in Moncton after two patients and a healthcare worker tested positive, Vitalité Health Network announced Wednesday.

An exposure notice for the unit was published on December 7 after the detection of the first positive case.

Vitality has comprehensive infection prevention and control precautions in place, such as increased cleaning, as well as regular contact screening and tracing, according to a press release.

“At the moment, the epidemic has no direct impact on the care and services provided,” he said.

Designated support persons are not permitted to visit nephrology unit patients until further notice and effective
visitation restrictions remain in effect in other units.

Here is the regional breakdown of the 160 new cases of COVID-19 confirmed on Wednesday:

The province has stopped providing a more detailed breakdown of cases, including age and origins, in its daily updates, instead directing people to its “enhanced” COVID-19 dashboard.

Forty-two people are hospitalized with COVID-19, a decrease from two, including 14 in intensive care. Six of them are on ventilators.

It is not known how the province defines “mild to moderate” and Shephard could not immediately provide an answer on Wednesday.

As of Wednesday, 31% of children aged five to 11 received their first dose of a COVID-19 vaccine and more than 17,000 appointments are scheduled for this age group.

New Brunswick has recorded 9,973 confirmed cases of the virus since the start of the pandemic, with 8,686 recoveries to date and 144 COVID-related deaths.

Public Health on Wednesday listed a number of possible public exposure notices, including a restaurant in the Moncton area, Zone 1, an outpatient clinic at a hospital in the Saint John area, Zone 2, gymnasiums, a library and restaurants in the Fredericton area, zone 3; and a convenience store, furniture store and cafe in the Miramichi area, zone 7.

People who have not been fully vaccinated at least 14 days before a possible exposure and who have symptoms should undergo a COVID lab test. They can make an appointment online or call Tele-Care 811 and must self-isolate while awaiting the result of their test.

People who are not fully vaccinated and are not showing symptoms are now encouraged to purchase a COVID-19 Rapid Point of Care Test (Rapid POCT) home screening kit. They don’t need to self-isolate if they haven’t been instructed by public health to do so.

All positive point-of-care test results should be confirmed by a laboratory polymerase chain reaction or PCR test.

It can take up to 14 days to test positive after being exposed to COVID-19, so even if the results are negative, people should continue to self-monitor for any symptoms and get tested immediately if they are. expands.

They should also avoid visiting settings where vulnerable populations live, such as nursing homes, correctional facilities and shelters during this 14-day period.

For people who have been fully vaccinated at least 14 days before a possible exposure, public health recommends monitoring symptoms for 14 days after possible exposure and taking a COVID lab test if symptoms develop.

They don’t need to isolate themselves while waiting for their test results.

If they don’t have symptoms, they can get a quick test kit and don’t need to self-isolate.

What to do if you have a symptom

People who are concerned about having COVID-19 can take an online self-assessment test.

In children, symptoms also included purple markings on the fingers and toes.

People with any of these symptoms should stay home, call 811 or their doctor, and follow directions.