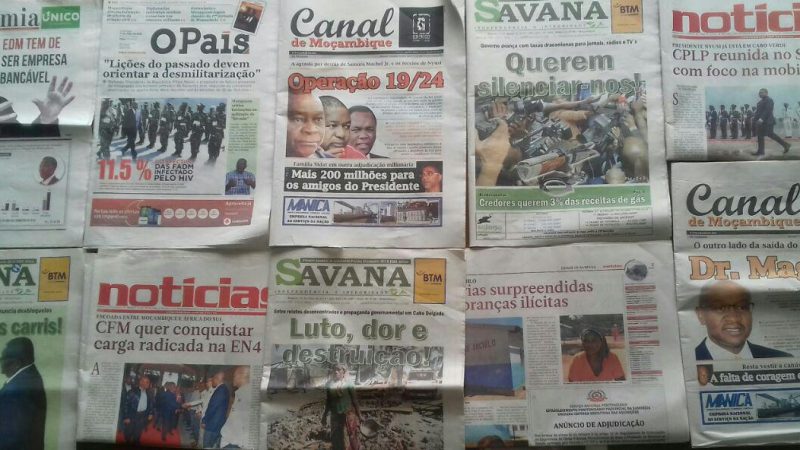 In mid-June 2021, the New York-based Committee to Protect Journalists (CPJ) decided to award the Press Freedom Prize to four journalists, including the Mozambican Matias Guente, editor of the weekly Moçambique Canal.

Matias has faced “violence, harassment, repression and persecution, but has refused to back down” in his mission, as CPJ executive director Joel Simon said in a statement.

CPJ is a US-based committee of journalists. In the ruling, members of the organization noted that Matias Guente is a journalist who “over the years has faced a series of threats for his harsh reporting, including police interrogations, rape charges, secrecy. state and conspiracy and an attempted kidnapping in 2019. “

CONGRATULATIONS to Matías Guente de #Mozambique being one of the @freedom of the presswinners of the 2021 International Press Freedom Awards (#IPFA).

With this award, Matias becomes the first journalist in Mozambique to be recognized by a high-level international journalism jury.

According to the organization Reporters Without Borders, Mozambique is ranked 108th out of 180 countries in the world ranking of freedom of expression. In 2013, the year the analysis began, the country was ranked 73. The organization says political interference in local media as well as administrative and financial restrictions are the main reason for the decline.

In addition, media professionals in Mozambique are increasingly facing attacks. The One Free Press Coalition has called the disappearance of journalist Ibraimo Abu Mbaruco, of Palma, Cabo Delgado, as the most serious press freedom violation in the world. Mbaruco disappeared in April 2020 after covering a conflict that has been taking place in northern Mozambique since 2017.

In August 2020, another attack on the press took place in Mozambique. Unidentified individuals invaded the Moçambique canal and set furniture and equipment on fire. Newspaper staff refused to remain silent and set up an outdoor newsroom the next day.

Freedom of speech and of the press has now suffered a double blow. Journalist Armando Nenane was arrested by police authorities. Meanwhile, the Jornal Independente @Canal_Moz was set on fire.

… All the press material was burnt to the ground, but this morning people came and donated computers, desks, plastic chairs and the team quickly got back to work on the streets. Tomorrow’s deadline will be met
A Luta Continua! @Canal_Moz #Mozambique #Free press pic.twitter.com/XDX8MbpDIB

I just returned from @Canal_Moz bombed offices. Inspire the resilience of these men and women. They are already back to work, hours after the bombing! The allies were also nimble and responsive #solidarity #Mozambique pic.twitter.com/LQtknwTxIZ

At the time, the attack on the newspaper directed by Guente was condemned by the President of the Republic:

I strongly condemn the attacks on the “Moçambique Canal” perpetrated by strangers last night, August 23, 2020.

Freedom of the press is a pillar of democracy and of the conquest of Mozambicans that must be protected. We will call on the authorities to investigate and bring the perpetrators to justice.

Before that, the same publisher had escaped an alleged attack to be a failed kidnapping:

Meanwhile, in the country where impunity reigns …
Editor of @Canal_Moz, Matias Guente, escaped a kidnapping attempt this afternoon in Maputo. He was followed by 3 men in a Toyota, who attempted to force him out of his car. He managed to defend himself, called for help in a garage.

Matias managed to escape such an act unharmed, although he was subsequently hospitalized for medical treatment. More than two years later, the perpetrators are still unknown.

The editor-in-chief of Canal de Moçambique and CanalMoz was hospitalized after armed men tried to kidnap him in Maputo https://t.co/RVRBuNBD6z pic.twitter.com/s0LBUd4k7B

Reactions after the award

Congratulations to the editor-in-chief of the Moçambique Canal, Matias Guente, who is one of the four @freedom of the press International Press Freedom Laureates for 2021. #Mozambique https://t.co/i8XRe8mfFs

In addition to congratulating the achievement, university professor José Macuane said the award was an indication for those affecting the freedom of speech and press of Mozambicans:

Matias Guente, congratulations on your nomination for the International Press Freedom Prize. Well-deserved. You who play at restricting the freedoms of the press and others, who have fun with the project to make the life of your compatriots a hell, it falls on you!

And also proof that the world is watching you and that it can become a very inhospitable place for you. They already have enough examples to learn from history.

Tom Bowker also congratulated Matias Guente. Bowker is among the journalists who were kicked out of the country in early 2021 for allegedly carrying out illegal activities. It has a communications portal, Cabo Delgado, which has widely reported on the conflict in northern Mozambique.

A deserved recognition for the courageous Matias Guente, editor-in-chief of @Canal_Moz, who is relentless despite violent attacks on him personally and his newsroom https://t.co/vdfLtzYdB1

5 products you should know