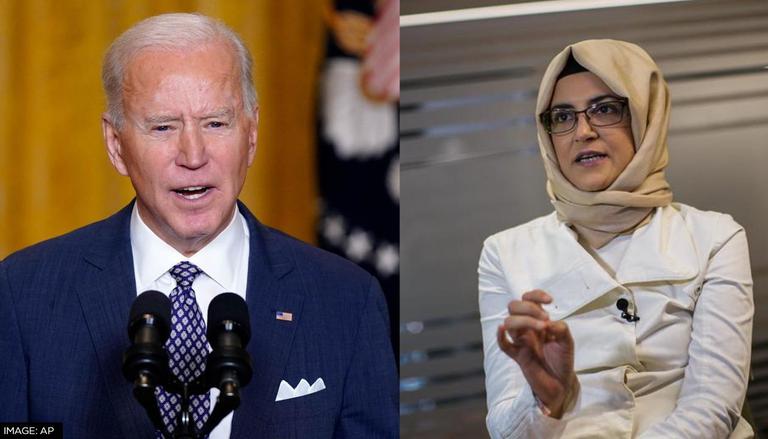 Hatice Cengiz, the fiancée of slain Saudi journalist Jamal Khashoggi, has called Joe Biden’s decision to visit Saudi Arabia “heartbreaking”, accusing the US president of backtracking on his promise to prioritize human rights.

In an interview with The Associated Press in Istanbul a day before Biden travels to Saudi Arabia on Friday to meet the crown prince, Cengiz said Biden should put pressure on Saudi Arabia – a country she described as a “terrible ally” – for him to adopt a policy of human rights. agenda. She also wants Biden to demand more answers from Saudi authorities about what happened to Khashoggi’s remains.

Crown Prince Mohammed bin Salman has long denied any knowledge of or involvement in the murder of Khashoggi, which was carried out inside the Saudi consulate in Istanbul by agents who worked for the young heir to the throne. A US intelligence report that Biden declassified after taking office said Khashoggi’s murder could not have happened without Prince Mohammed’s knowledge.

Cengiz had gone with Khashoggi to the Saudi consulate for an appointment to collect the necessary documents to marry him. While she waited outside, he entered and never reappeared.

“That day destroyed my life. And I don’t want to remember any part of that day,” Cengiz said Thursday, recalling that they planned to pick out new furniture for their home after his visit to the consulate and meet friends.

At the time of his murder, Khashoggi was a US resident and columnist for the Washington Post who had written articles criticizing the crown prince’s growing crackdown on activists. He had previously held positions in the Saudi government, but turned into a critic at a time when the crown prince was hailed in Western capitals for ushering in social reforms inside the kingdom.

The October 2018 murder and attempts to cover it up drew international condemnation, and Prince Mohammed’s reputation has never fully recovered.

The prince, however, began to attract large Western investors who initially turned away from the kingdom after the murder. He also restored ties with Turkish President Recep Tayyip Erdogan as Turkey seeks investment in the Gulf to support the strained economy.

The kingdom has tried and found some people guilty of the operation that killed Khashoggi, but no senior official or person overseeing it has ever been convicted.

Biden came to power as a bitter critic of the crown prince, straying from the warm relationship cultivated under President Donald Trump. Biden has said during his campaign that he believes Khashoggi was killed on the orders of Prince Mohammed, describing the kingdom as a “pariah” and saying “there is very little redeeming social value in the current government in Saudi Arabia”.

“It’s actually a huge setback,” Cengiz said of Biden’s decision to now restore diplomatic ties with Saudi Arabia. “It’s heartbreaking and disappointing. And Biden will lose his moral authority by oiling and opportunistically over principles and values.

Oil prices have been climbing steadily for months, but rose even more after Russia’s war in Ukraine. Energy prices, inflation and the economy are worrying voters as Americans prepare to go to the polls in November.

Members of Biden’s Democratic Party have urged the president to make human rights a key part of his discussions with the crown prince when he meets on Friday, while acknowledging that Saudi Arabia is an important ally and producer of United States oil.

Biden on Thursday declined to pledge to mention Khashoggi’s murder when meeting with the prince.

“I always talk about human rights,” Biden said at a joint press conference with Israeli Prime Minister Yair Lapid. “But my position on Khashoggi has been so clear. If someone doesn’t understand him, in Saudi Arabia or elsewhere, he hasn’t been here for a while.

Biden said the purpose of his trip to Saudi Arabia was “broader” and designed to “reaffirm” American influence in the Middle East. He is due to attend a summit of the Gulf Cooperation Council, which includes several Arab countries.

“One of Biden’s promises (was) to be different. It was a very high hope for me to believe, again, that Biden will do something for me and for Jamal,” she said. “Instead of being different now, he’s doing the same thing and embrace the dictators in the region right now. So it’s very disappointing for me.

“He must be asking what happened to his body?” Where is his body? We still don’t have an answer,” she added. “And people need to know the truth in this case. And we can’t forget.”

“We cannot forget what happened to Jamal.”

(Disclaimer: This story is auto-generated from a syndicated feed; only image and title may have been reworked by www.republicworld.com)