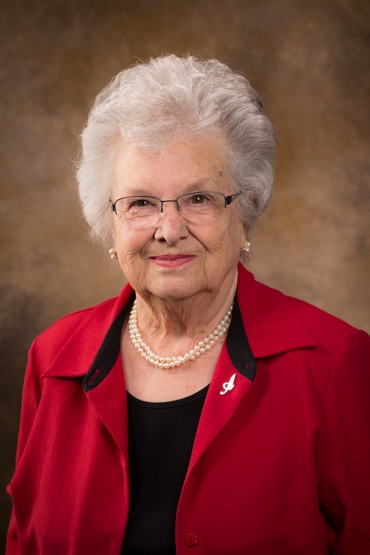 Longtime U of A supporter Jama Fowler died on April 20, 2022. Jama and her surviving husband of 65 years, Wallace Fowler, were major supporters of the U of A and the Razorback Foundation.

Jama was born in Amity, Arkansas, in 1936 and was introduced to her future husband in 1955. The two married soon after. While serving in the U.S. Army, Wallace was assigned to a position as a dental lab technician at the 98th General Hospital in Neubrucke, Germany. There, the couple traveled extensively in Europe.

In 1957, the couple returned home and successfully built many business ventures in partnership, including running furniture stores, owning KFC restaurants, and banking interests.

Throughout their success, Jama and Wallace have generously supported the communities they hold dear, including Jonesboro and Fayetteville, with their volunteer service and financial resources.

Jama has volunteered at Phil and Flo Jones Hospice House, Altrusa Club, Jonesboro Church Health Center – of which she was a founding member – and the Salvation Army, all in Jonesboro. She had also served on the board of trustees at John T. Gray School in Jonesboro and had been an active volunteer with United Cerebral Palsy of Northeast Arkansas for many years.

The Wallace W. and Jama M. Fowler House, the chancellor’s residence on the U of A campus, and the Fowler House Garden and Conservatory welcome university guests for a variety of celebrations and events on the campus through the philanthropy of Jama and Wallace.

“Fowler House and the Conservatory are a testament to our campus of the generosity and lasting positive influence for which Jama, Wallace and their family are so well known,” said Charles Robinson, Acting Chancellor. “We are continually grateful for the kindness and partnership Ms. Fowler has always shared with the university, and our hearts are with her family at this time.”

Jama and Wallace have served on the steering committees of two major fundraising campaigns, Campaign for the 21st Century and Campaign Arkansas. “Jama’s friendship and spirit of generosity have been invaluable. Our campaign achievements have been greater thanks to Jama and Wallace,” said Mark Power, Vice Chancellor for Advancement. “Jama’s kindness and goodwill towards others will be missed.” The Fowlers are also members of the U of A Chancellor’s Society and Towers of Old Main.

Their love of Razorbacks took them across the country as they traveled to Razorback sporting events in their 45ft RV.

“Everywhere you look on campus you can see touches of the Fowler family, including our athletic facilities,” said Vice Chancellor and Director of Athletics Hunter Yurachek. “We are saddened by the loss of Ms. Fowler and are eternally grateful for her and Mr. Fowler’s support over the past two decades.”

Jama and Wallace have three sons: Wally (Chris Cooper), Chris (Kim), and Mark (Lisa), who carry on their parents’ legacy of generosity across the state and love of the U of A.