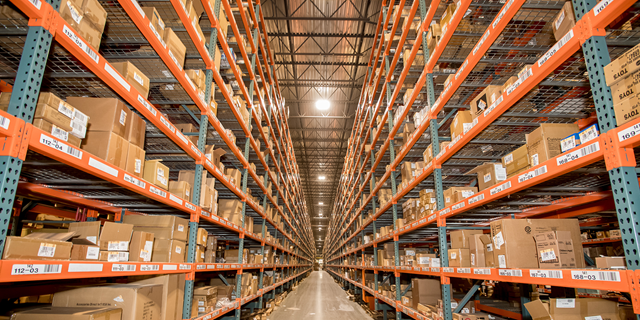 As excess inventory piles up in warehouses, retailers are exploring different methods to free up space.

Target said its product inventory was up 43% from a year ago and Walmart’s was up 32%. The two retailers resorted to methods such as discounts to unload the goods. Dozen of Old Navy stores, on the other hand, scaled back the company’s inclusive sizing program to realign their inventory.

Retailers recently warned they had too much inventory due to changing consumer demand and supply chain issues, which had a significant impact on their bottom line. As consumers spend less money on categories that have followed the trend during the pandemic – like athleisure and home goods – and more on travel and entertainment, retailers are left with a supply of goods which consumers no longer want, at least at full price. In order to reduce their stock levels, some have resorted to discounts, while others have completely reduced their assortment.

“These orders have to be placed weeks and, typically, months in advance for most items,” said Brad Jashinsky, chief analyst at Gartner. “You’re seeing excess inventory coming back to retailers that ordered, you know, months ago when consumer demand was very high.”

What retailers are doing to get rid of goods

A few quarters ago, some of the products that retailers were sourcing were experiencing high levels of demand. During the first quarter of 2021, apparel, home and hard-goods were some of the categories that drove sales growth for big-box retailers like Target. So much so that retailers like Walmart and Target decided to increase their inventory levels and invest in new exclusive brands in these categories. Target, for example, launched a line of home storage organization called Brightroom in early 2022.

But in its most recent quarter, Target reported that the categories leading sales growth had reversed; instead, customers were spending more on categories like luggage and toys.

Due to this sudden shift in spending trends, decisions made months ago are now impacting retailer operations. “It’s this challenge of wanting to have excess inventory or no inventory? And given that decision, it’s probably better to have that excess inventory,” Jashinsky said. “But there are so many factors… which I don’t think anyone could have predicted.”

One of the first steps retailers take to scale their inventory is to cancel vendor shipments before they hit the waters, Jashinsky said. Target earlier this month said it already has canceled purchase orders as part of his plan.

“Part of it is trying to create demand for something that’s usually not exactly in season or you have too much of it and your normal sales won’t reduce enough to the levels you need to encourage more people. to buy it,” Berliner said.

Walmart and Urban Outfitters are rolling out markdowns for clothing goods after a poor demand forecast. With inventory levels up 9% year-on-year, Corie Barry, CEO of Best Buy said on the first-quarter earnings call that the company expects “promotional activity to increase.” Target said it carries too many bulky items like furniture and TVs and will discount larger items to give shelf space to high-demand goods.

“Consumers who didn’t really think about buying it, because it’s at a nice discount, will buy it,” Berliner said. “If you sell things at a big discount, it hurts your bottom line.”

Demand for goods can vary based on geographic location, so if certain products aren’t selling well in one store, a retailer may ship them to another store, Jashinsky said. Other retailers may also ship unsold stock to their own factory outlets. Best Buy recently announced plans to double the number of factory outlets it has over the next year, which executives say will reduce space in their main stores.

There are winners and losers in difficult times – and off-price retailers are about to be the first because stocks are overflowing. Off-price retailers – such as TJ Maxx, Ross and Burlington – often buy unsold or surplus merchandise. Already, Burlington said on an earnings call in May that it is seeing a supply of products from brands the company hasn’t seen in years.

“The shopping environment is now better than it has been for years. Our buyers are seeing great business,” Burlington CEO Michael O’Sullivan said. to build up our reserve inventory.”

If all else fails, experts said liquidation could be the last step to getting rid of unsold goods. Liquidators like Quicklotz Liquidations and Liquidity Services focus on reselling unsold or returned merchandise from full-price retailers like Amazon and Target. Liquidating products could also mean completely destroying products, which some luxury brands, such as Coach and Burberryhave received negative feedback in the past.

The aftermath of the stock glut

In the coming months, some retailers have already warned investors that earnings could continue to be in the red.

Target’s operating profit already fell 43% year-over-year in the first quarter, and Walmart’s fell $1.6 billion. For the second quarter, Target said it expects its operating margin rate to be about 2%less than the 5.3% rate it was initially giving.

“If you have very high excess inventory levels, as many retailers have right now, you need to spend more money on warehouse space, whether in-house or at ports” , said Jashinsky.

Experts said some retailers may end up eliminating certain products or variations in an effort to better manage inventory, as was the case at Old Navy. Its parent company, Gap, said it overestimated demand in stores for its larger sizes. Approximately 75 stores will no longer carry extended sizes in the United States and 15 in Canada. Last year, clothing retailer Loft also scrapped its plus-size offering due to “business challenges”.

Additionally, BDO’s Berliner said retailers may rethink their sourcing strategy. considering that there is no end in sight for supply chain constraints. “I think people have become familiar with the supply chain and have taken risks by having all or a good percentage of their supply come from one region or one country,” he said. declared.

Jashinsky said that while many retailers expect inventory levels to start normalizing by the fourth quarter, there are too many variables involved to predict future results.

France: A kitesurfer killed and several people injured after a “mini-tornado” hits the beach | world news

5 mattresses for back health the American Chiropractic Assn. approved

Amazon Freedom Festival: Up To 70% Off Furniture, Home Decor & More | Most…