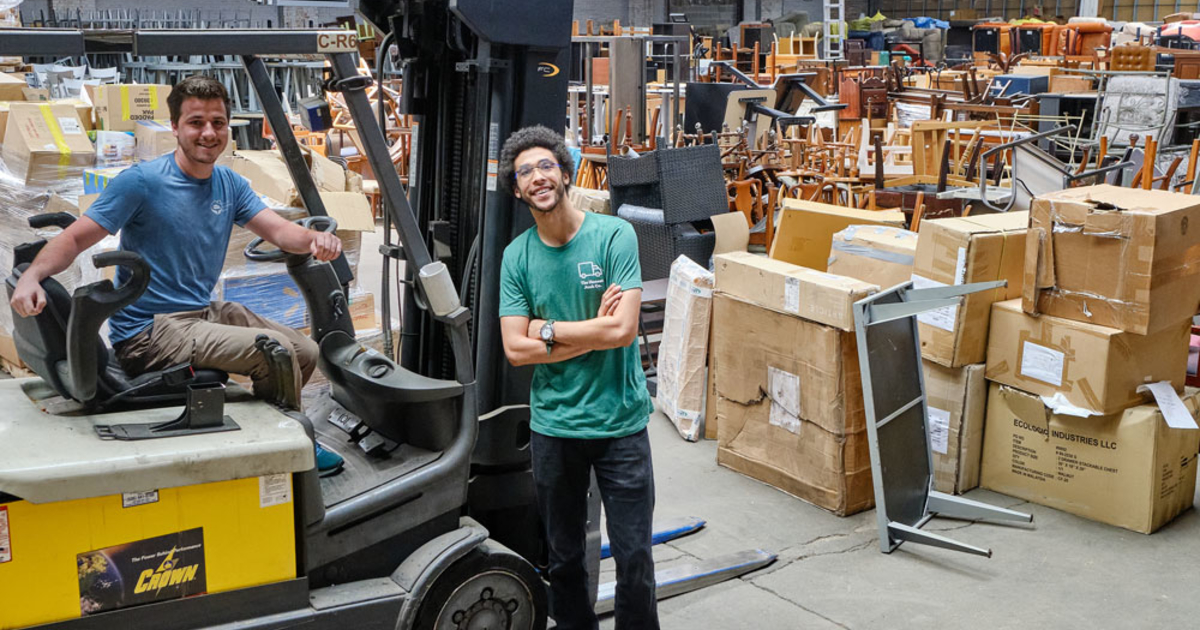 When Brian Evans turned the key to his new Rogers Park apartment the day after Thanksgiving, it marked a turning point in his journey home from the bottom. Evans has spent most of 2021 on the streets, battling winter in a Millennium Park parking lot. He bounced around the Loop for the next few months, including a summer stint at Millennium Park before having to clear during the run-up to Lollapalooza. He was living under the elevated tracks of Lake and Clinton streets when he learned he had finally been approved for his new home on the Far North Side.

“I’m not an animal. Animals can live outside, but I can’t,” Evans says.

But there was a catch on move-in day: the place had no furniture. For months, Evans slept on the floor.

For years, this kind of slow, awkward transition has plagued relocation efforts in the Chicago area. But in 2018, the city received a jolt of support from an unlikely source: a pair of graduates from the Wharton School at the University of Pennsylvania. Griffin Amdur and Andrew Witherspoon won a school social enterprise business plan competition for their vision to create a furniture bank in Chicago modeled on a similar organization in Philadelphia. Their research showed that an abundance of used furniture was thrown away each year, rather than reused, from hotels, universities, businesses and private homes.

After graduating, armed with a cash prize of $200,000, the couple moved to Chicago and established the Chicago Furniture Bank. For Amdur, 26, a former student of Francis W. Parker School, it was a homecoming; Witherspoon, 27, is from St. Louis. They rented 4,000 square feet in a warehouse in North Lawndale, collected letters of support from nonprofit housing organizations attesting to the need for furniture, then took those letters to real estate sales companies and agencies. of business dismantling, asking for donations.

These organizations were wary of groups of volunteers who weren’t “as professional as they need to be when doing major renovations with many contractors and a tight schedule,” Amdur says. So he and Witherspoon adapted their facilities and operations to ensure they met their partners’ standards. Chicago Furniture Bank’s ability to quickly load and unload multiple semi-trucks full of sofas, dressers and cabinets is one of the features that sets it apart from the nation’s smaller companies.

By uniting those who had a furniture supply with those who needed it, Amdur and Witherspoon built a classic two-sided market of Silicon Valley-backed startups like Uber, Grubhub and Groupon. Except that the “demand” side of the market was made up of homeless people, a group not consistently targeted by the venture capitalist crowd.

“I’m still a banker, but not an investment banker,” Witherspoon says.

This year, the Chicago Furniture Bank is on track to reach 4,000 customers. Amdur believes it is now the largest furniture bank in the country, a real transition for a town that had no such service five years ago.

After four years of full-time work, Amdur and Witherspoon are preparing to transition into more typical Wharton graduate careers. They are in the process of hiring an executive director for the Chicago Furniture Bank and plan to remain directors on its board.

“It will always be in our blood,” Witherspoon said. “We’re just going to help direct it from a little higher.”

“One man was so excited he actually cried. He said he couldn’t believe this was happening to him,” said Sherri Allen-Reeves, associate director of Matthew House, a day shelter in Bronzeville who helps homeless people make the transition to permanent housing. . “I just applaud these young men who had the vision, the foresight, the will, the tenacity and the joy to do this work.”