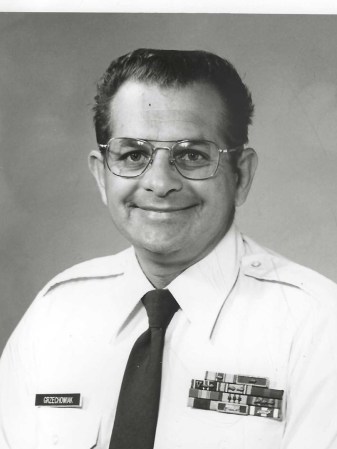 TSGT Edward Anthony Grzechowiak SR (Eddie Gee), 85, passed away peacefully on December 14, 2021 with his son and daughter-in-law by his side at their Austin home. Eddie was born in Buffalo, NY on February 4, 1936 to Chester and Sophie (Mateczun) Grzechowiak. Eddie had a brother, Richard Grzechowiak, and a sister, Christine (Lewis) Heckathorn. Eddie graduated from West Seneca West High School in 1955. He was on the high school basketball team and received state awards for track and field and wrestling. After high school, Eddie held a few odd jobs before enlisting in the USMC in August 1956. Eddie reached the rank of SGT and received an honorable discharge after choosing not to re-enlist in 1967. He also received the medal of the national defense service and good conduct. Medal in the Marines. While stationed at Parris Island, SC Eddie met Anna Marie Schild. They were married on March 12, 1966. In April 1968, Eddie re-enlisted, this time with the USAF. He was an SSGT when he re-enlisted and trained at Air Force bases in Laredo, TX and Selma, AL. be an aircraft mechanic. Eddie was stationed in Okinawa during part of the Vietnam War and was awarded a Republic of Vietnam Campaign Medal and the Republic of Vietnam Cross of Gallantry with Palm. In Selma, Alabama. Eddie and Anna had two sons, Edward Grzechowiak (1972) and Robert Grzechowiak (1973).

In 1977 Eddie moved his family to Austin, MN so they could be closer to Anna’s family in Chatfield. Eddie was the Austin Air Force recruiter until 1981. After a year stationed at Hurlbert Field in Florida, Eddie retired from the Air Force on May 1, 1982. After his retirement, Eddie and Anna retired. divorced and returned to his hometown of Buffalo, NY. Eddie worked for a radiator repair shop for a few years before becoming a furniture salesperson for a large furniture store in western New York. Eddie has always been the best seller of the year, and a year has only gone a few thousand dollars short to sell a million dollars in merchandise. Eddie retired in 1997. Before and during his retirement Eddie enjoyed fishing and being on the water. He has always owned a boat. Eddie liked to have a good time. He enjoyed playing pool, playing horseshoes, telling stories and jokes, and watching the Buffalo Bills. Eddie was also known for his cooking. From his corned beef and cabbage dinners he made every St. Patrick’s Day to his thousands of Perogies that he made from scratch with his mother’s secret recipe every Thanksgiving and Christmas season to give away. to his family and friends.

Eddie is predeceased in death by his father (Chester) and mother (Sophie), his stepfather (Victor Kubiak), his brother (Richard), his sister (Christine) and his brother-in-law (Lewis Heckathorn), his ex-wife (Anna) and Son (Robert). Eddie is survived by his son Edward (Heather) Grzechowiak, three grandsons, Steven, Gavin and Hunter, as well as several nieces, nephews and in-laws.

Eddie’s funeral will be on Thursday, December 30, 2021 at 11:30 a.m. at the Riley Funeral Home in Chatfield, MN. Visitations will be from 10:30 am to 11:30 am Interment will be held at the Minnesota State Veterans Cemetery in Preston immediately following the service.

Online condolences are welcome at rileyfuneralhomes.com.