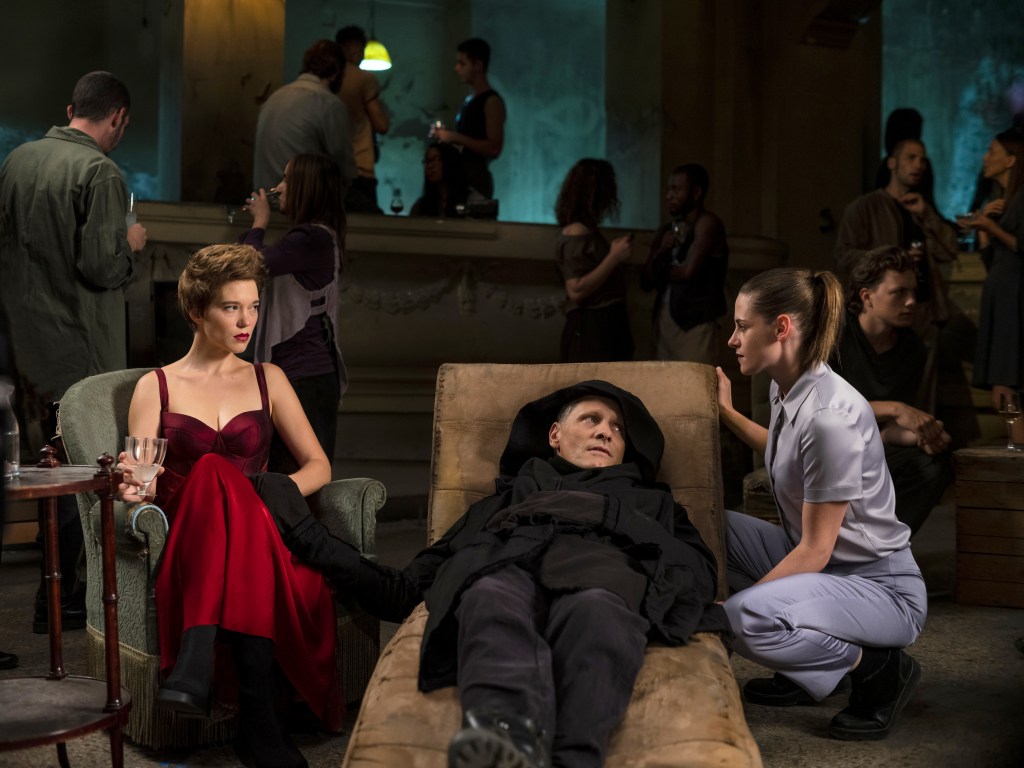 “THE CRIMES OF THE FUTURE”

In David Cronenberg’s latest descent into the upcoming surreal horror “Crimes of the Future,” the human body has evolved to the point where individuals can create new organs almost at will. One of them is a boy (Sozos Sotiris) who, in the film’s shocking opening, eats plastic.

Protagonist Saul Tenser (Viggo Mortensen, Cronenberg’s on-screen alter ego) “cooks” new body parts inside himself at frequent intervals. He turned their discovery and suppression into a form of “performance art” conducted with the help of his companion and lover Caprice (Léa Seydoux). Tenser sleeps in a clam-like thing called the OrchidBed that appears to be alive and is designed to massage and shake him. He also has a living chair that is half furniture, half exoskeleton.

Tenser and Caprice are very successful. They are added to their ranks after visiting a government registry office, where they meet new flesh enthusiasts Timlin (a Renfield-esque turn of Kristen Stewart) and Beardo Wippet (Canadian actor Don McKellar). They treat Tenser and Caprice like rock stars.

Caprice keeps track of Tender’s new organ by inserting fiber optic goggles into the holes in his stomach. A buzzing fly reminds us that Cronenberg was the director of a certain body-transforming 1980s hit. After a performance, a trembling Timlin creeps up to Tenser and whispers the words, “Surgery is the new sex.”

The film, which was shot in Greece, uses giant shipwrecks as an exterior backdrop and is set in a climate-ravaged world. During a performance, Caprice, who was a surgeon before meeting Tenser, uses a control panel to direct motorized scalpels that slice into Tenser and remove the new organ from him. Needless to say, “Crimes of the Future” is not for the faint of heart.

But Cronenberg fans will be swept away by the film’s unapologetically daring weirdness. The film is like a dark dream that we all live collectively in the theater. This is the essence of cinema. Constantly clearing his throat (God knows what he might spit up), Tenser in his black capes looks like nothing more than the figure of death from Ingmar Berman’s iconic “The Seventh Seal.”

The plot also involves a father (Scott Speedman), who leads a cult of purple chocolate bar-eating members. The father wants Tenser and Caprice to perform a public autopsy on his deceased 8-year-old son. In an age of reality TV superstars who take exhibitionism to new heights on a daily basis, such an event seems set to go to sold-out venues.

Inevitably, some of the ideas launched in “Crimes of the Future” are less promising than others. But a shipyard scene in which a miraculously enlightened “New Vice” detective (Welket Bungue) encounters Tenser at the roar of an unseen sea and a dirge-like score by Cronenberg regular Howard Shore is a marvel. Artist-magician Cronenberg has conjured up dazzling and prophetic visions for decades. “Crimes of the Future” is his latest piece of black magic. See.

(“Crimes of the Future” contains gruesome and graphic imagery, violence, nudity and profanity.)