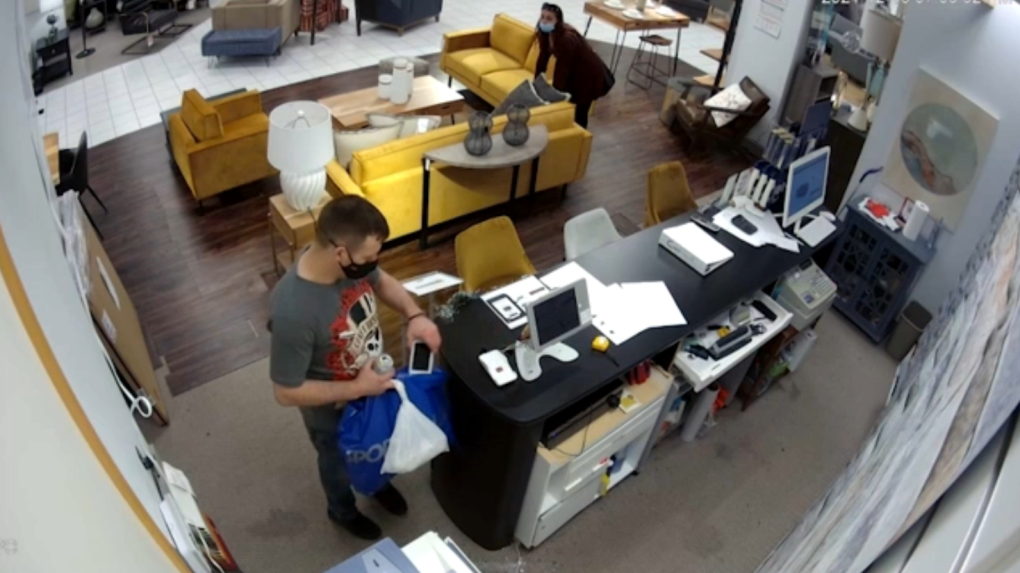 Operators of a Burnaby furniture store are warning fellow retailers after thieves steal a point-of-sale card reader from their checkout counter.

The incident happened at the Accents @ Home store in downtown Brentwood earlier this week. A couple walked in as staff prepared to shut down for the night, according to one of the store managers.

They spent between three and five minutes in the store and picked up the device while a member of staff was not looking.

Video of the theft shared with CTV News shows a man standing by the cash register with his back to it, apparently talking with a woman who is looking at a sofa.

The man then turns and quickly removes the card reader from the desk and places it in a blue bag from another store.

The pair then move to leave the store.

According to the store manager, the manager on duty noticed that the machine had disappeared a few minutes after the couple left, as it was closing for the day.

The manager immediately reported the incident to mall security and the RCMP. The store also contacted the point-of-sale trader to make sure the machine is offline and there is no data breach.

The manager who spoke to CTV News said the store is hopeful that sharing the video can help other business owners be more aware of the risk of this type of theft during the holiday season.

Thieves with the right technical knowledge can use stolen point-of-sale terminals to transfer money from store ownership to a cardholder, or to access cards that the terminal has previously read.

Bill Schubart: A Holiday Wish: Better Treatment for the World We Live in