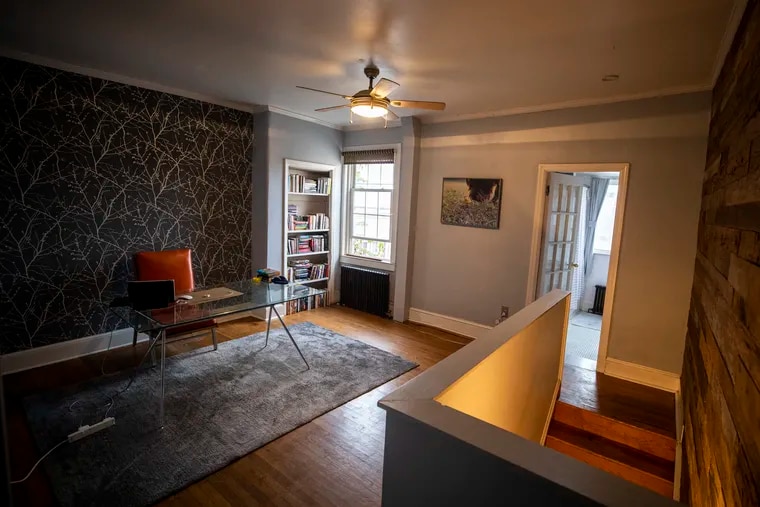 Joshua Morrow found one of his favorite pieces of furniture while walking his dog near his home in Brewerytown.

Last April, Morrow and Charlotte, a wire-haired pointing griffin, came across two men unloading the copper couch and transporting it to a warehouse. “I told them I wanted to buy it and asked them to put it back in the truck,” Morrow said.

The men went to find their boss, Steve Brown, who with Kenya Abdul-Hadi owns the modern Republic, a store specializing in mid-century furniture, art, and dinnerware acquired through door-to-door sales, auctions, and flea markets. Before moving last year to a showroom in Francisville, the owners stored items in the Brewerytown warehouse.

The next day, the sofa was delivered to the third floor of Morrow. Although manufactured in the 1960s, the elegant sofa was in perfect condition. It would be the first of several items Morrow purchased from Modern Republic, including a gray sofa and two blue chairs for his first-floor living room, a Danish-made tallboy dresser for his bedroom, and an assortment of stylish lamps and tables.

Morrow asked Brown and Abdul-Hadi to be on the lookout for counter-height chairs that could fit under his kitchen island.

Before discovering Modern Republic, Morrow had already acquired some style furniture. Its dining table with a cast concrete top inlaid with walnut was custom made by Philadelphia craftsman jeff miller. Morrow hopes Miller will make walnut benches with concrete inlays for the table.

The “waterfall” style wooden coffee table in the living room comes from Origin, an architectural salvage store in North Philadelphia. Panels of reclaimed barn wood surrounding the fireplace in the living room and covering a wall in the second floor stairwell were also sourced from Provenance.

Morrow purchased his brick townhouse, built circa 1905, in 2006. He has since made major renovations.

With the help of his father, Will, a retired carpenter, Morrow transformed the two bedrooms on the third floor into a bedroom/living room. He raised the ceiling and removed the plaster from two exterior walls to expose the brick. He also exposed a brick wall near the blue front door on the first floor. The other walls of the house were painted a pale blue-gray. The original oak floors have been restored.

The previous owners renovated the bathroom on the second floor where Morrow’s guest bedroom and office are located. The gray wallpaper behind her glass desk and orange chair is adorned with ethereal white tree branches.

» READ MORE: Selling a childhood home steeped in the history of Philadelphia art and architecture

Two large photos hung nearby show Charlotte sniffing a mushroom and Sadie, a Labrador retriever who died in 2017.

Morrow commissioned Penrose Construction in Pipersville to replace the small kitchen at the back of the house with a new kitchen in the old dining room. The remodeled space features cherry cabinets, black soapstone counters with white stripes, and a beige and cream travertine backsplash. The new window above the sink brings in light. Above the dining table are framed botanical prints and a photo of iconic Philadelphia chef Georges Perrier.

The old kitchen is now a changing room where Morrow stores his bike. (He doesn’t own a car.) A handsome barn door hides the pantry. Other doors lead to the basement, where there is a full bathroom and a laundry room, and to the patio with a barbecue, garden furniture and planters, which will be filled with greenery and flowers next summer.

Indoors, Murrow tends to a lush fern and other houseplants from Cultivatea store in the neighborhood.

Morrow, 48, grew up in Lancaster and graduated from Millersville University. He is executive director of 3.14 Action, a company with offices in Philadelphia and Washington that recruits scientists and STEM professionals to run for public office.

Several months ago, while browsing the Joseph Fox Bookstore on Sansom Street, Morrow found a book by illustrator Cristina Amodeo, Dogs and chairs: designer pairs. He associates drawings of dogs with drawings of designer chairs whose shapes they resemble.

Morrow commissioned Fairmount Framing to assemble and frame four drawings of dogs and four drawings of chairs from the book. The witty art, now displayed in Morrow’s bedroom, celebrates two of his favorite things: dogs and modern furniture.

Is your home a Haven? Submit your home by email (and send digital photos) to [email protected].

Saving money: 7 tips from On Your Side to beat inflation on furniture, groceries, clothes and more

Biden delivers remarks at legislative conference; The government has a long-term inflation plan, but voters’ patience is short