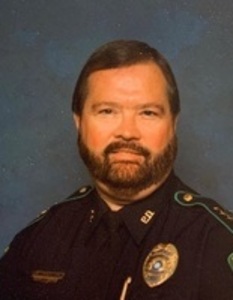 Billy Dean Williamson “Bill” was born on October 23, 1954 and died on Tuesday, May 31, 2022 at the age of 67. He was the son of Guy Williamson and Mary Alice Fails Williamson-Thomas of Huntsville, Texas.
Bill was a loving husband, father and grandfather. He married the love of his life Sherri Williamson on March 10, 2001.
Bill accepted Jesus Christ as his Lord and Savior as a child and was baptized at Second Bapstist Church in Huntsville. He has been a member of the Covenant Fellowship of Huntsville for 14 years. He graduated from Huntsville High School in 1973. Bill served his community as a Huntsville Police Officer, worked in the Facilities Division of the TDCJ, and served as Chief of Police for HISD for 11 years. He retired from the Texas Board of Dental Examiners in 2020. He began his service life at a young age helping in the family grocery store and has continued to serve his community in many capacities, including as a member of the Covenant Fellowship Security Team.
He was Papa Bill to his grandchildren and Mr. Bill to many others. Bill was known for his integrity and considered himself a protector of everyone, especially children. Those who knew him best appreciated his wry sense of humor and dry wit. Bill also loved being a craftsman. He was an artist and master carpenter, building handmade furniture and decor that is enjoyed by friends and family. He was also known for his incredible cooking skills.
Bill was predeceased by his parents, brother Guy Frank Williamson and stepmother Betty Rowan. He is survived by his wife Sherri; son, Brandon Williamson and wife Toi of Huntsville, Texas; Justin Williamson and his wife Chrissy of Raleigh, North Carolina; Nathan Reeves and his wife Kathleen of Stillwater, OK; Garrett Reeves and his wife Rachel of Chicago, Illinois; grandchildren, Mia Williamson, Ruby Reeves, Kylen Williamson, Hazel Reeves, Jetson Reeves, Darrin Lovell, Lindsey Lovell. Also, his nieces and nephews; Stacy Robertson, Christopher Williamson, Truett Walters, Ethan Walters, Chase Walters, Sarah Dempsey, Allison Dempsey, and Rebekah Dempsey; stepfather Hayes Rowan, sisters-in-law Sheila Dempsey, husband Gary and Kristi Walters, husband Phil.
In lieu of flowers, donations may be made to the Covenant Fellowship Church Vision Fund.