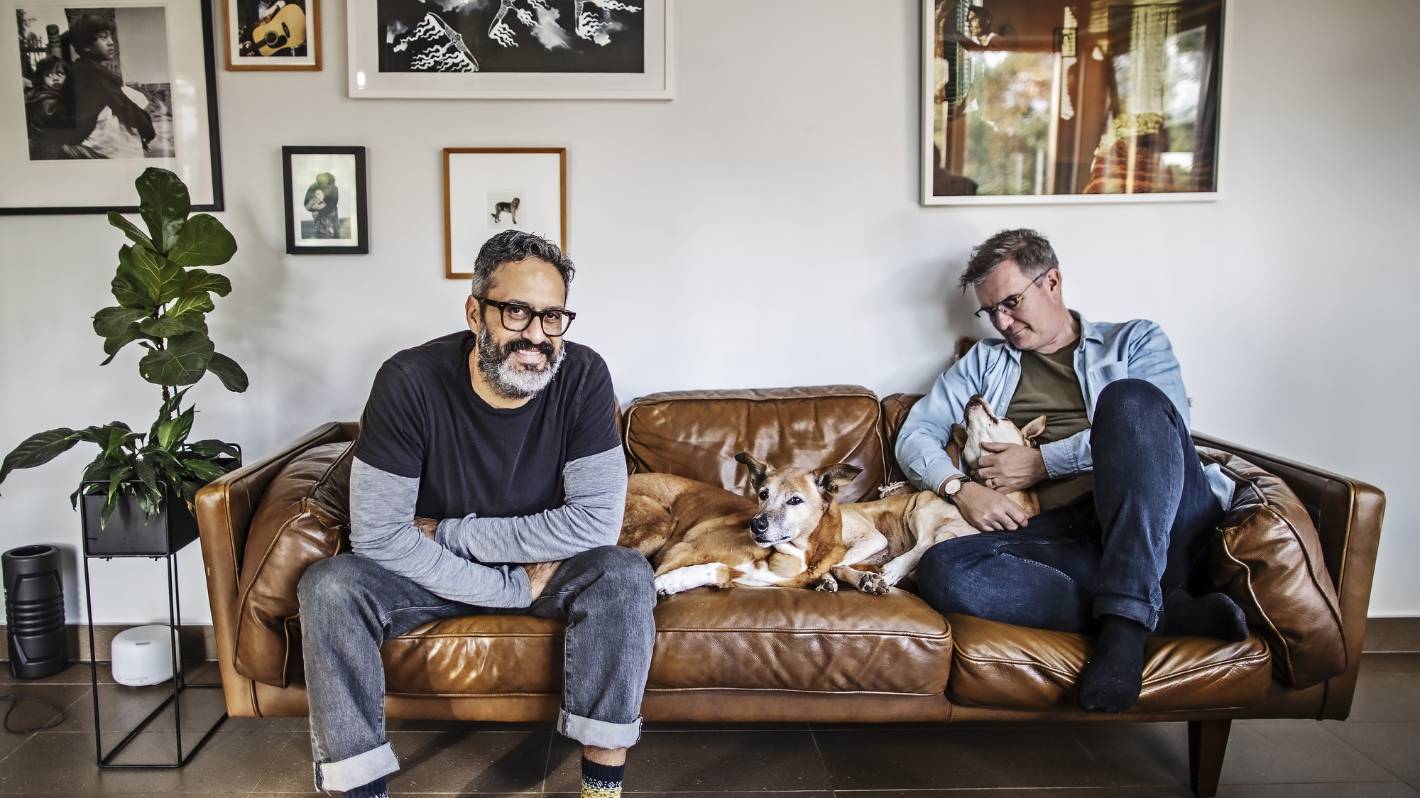 A home where no one needs to be precious about furniture

Photographer Russ Flatt (Ngati Kahungunu) felt from an early age that the camera was the perfect tool to express himself. He won the Wallace Art Awards with his work exploring his past and themes of identity, family and sexuality. He lives on a piece of land in the countryside with his husband Alistair Wilkinson and their son Jules.

FLAT RUSS: We have just moved from Piha Beach, where we have been for almost eight years.

We managed to get some land and the property has a small dwelling on it, a self-contained unit where our son is at the moment. It gave us the freedom to expand.

I would call our new place a cottage, it has these peaked roofs and lots of light, and it faces north, which we love.

We have art all over the wall, we also have some storage as we have only just moved into the property.

I have pieces of my work on the wall – it’s just because I’m storing them for my art dealer, he’s running out of space.

But many of them are my son and my husband, and especially my son who has grown over the years. Lots of Polaroids. It’s quite personal.

I definitely decorate instinctively. I know what will work well together, or even what might not work together, and I’ll just put it on the wall, leave it there, and if it doesn’t bring me joy, then I’ll move things around.

There’s no right or wrong way to hang art on walls, it’s so personal, so subjective.

My style at home is generally quite eclectic and very comfortable. It’s all about comfort.

We have pets, so it’s really all about durable, easy-to-wipe things. These are things that we are not going to be valuable for, otherwise it would just make us cry.

The couch we’ve had for years, even before Jules came into our lives. It’s an old Freedom sofa. He just keeps on giving.

Alistair and I both buy things we like, and I throw them where I think they might work, and he’ll also move things around.

In terms of artwork, he buys a lot of photography – at Webb’s [Auction house], and old press photos. He likes to find the really offbeat images, which is great. He’ll just drop it in conversation [sheepishly]’Oh, by the way, I have pictures to come’, and I’ll be like ‘oh great!’.

We have very, very similar tastes. We love mid-century modern, we love 70s design, with pitched roofs in terms of architecture, and we weren’t afraid of color.

The bronze hand is the trophy I received from the Wallace Art Awards in 2020. I was very honored to win this award. It happened at a good time.

The camera is my father’s old camera. It still works. The last time I used it, I took a nice photo of Alistair and his late mother, just before he died.

I was in residence in 2016 in Vermont thanks to the Wallace Art Award. I met a wonderful painter called Rema Ghuloumand she made the little ceramic sculpture as a talisman for me before I left.

It reminds me that I had the privilege of staying in Vermont and doing art for three months, which was truly a treat.

Polaroids are a pair per Annie Leibovitz. A friend of mine who was her assistant bought them for me, knowing that I was a big fan of Nan Goldin and Susan Sontag, which are the subjects. I like this.

The wall of the family photo gallery is that of Alistair and my tupuna, and our whānau with Jules.

The picture with the Venetian blinds and the flashes of light is one of mine, it’s called Waiting. I did this in 2010.

I was definitely inspired, and I looked and searched Gregory Crewson and I was really, really interested in creating scenes or childhood memories and unpacking things that happened in my childhood that I hadn’t really thought about in 40 years.

When you think back to things that happened at that young age, it’s fascinating to unpack them and see what they really were, from an adult perspective.

This specific image is of my father waiting for my sister to come home. She had jumped on the back of a biker’s bike and gone off in the night when she was 14 or something ridiculous. She was quite rebellious.

But my sister didn’t know that my father knew she was out.

“I love woodworking”: 130 times woodworking enthusiasts have taken their projects to the next level and shared the results on this Instagram account